I always enjoy the Halloween holiday and this past weekend was no different.  I was a little bummed out that we couldn’t dress up at work on Friday, October 30th but I made up for it by dressing up on Halloween to pass out candy to the kids.  But another aspect I always enjoy with Halloween is playing DDO and slaying many monsters :).  This year was no different.  I kicked off the weekend by taking Berann (Level 9 Barbarian) out into Tangleroot Gorge for some slayers.  I also took the opportunity for Containment (Level 7 Cleric) to tag along with him by dual boxing with my two accounts.  After work, I logged on with Hamllin (Level 17 Fighter) and I took him out into the undead zone of the Sands of Menechtarun as he continues to work on his 1,500 slayer mark in that region.  I then took him out to Delera’s Graveyard and to participate in the Night Revels.  It took me about three minutes or so to accumulate two keys.  I used one to enter Haverdashed on level 20.  I was expecting it to pretty easy but I underestimated the ability of my hireling cleric and my lack luster damage output with piercing weapons and found myself a soul stone during the fight with the skeletons with my hireling quickly following suit.  However, I did find out that when you fail an instance a key is still consumed.  No worries though, I had my revenge :).  I then called it for a little while and then logged back on Friday night with Erdrique (Level 22 Rogue/Fury of the Wild).  I had originally planned on knocking out the quests in the High Road so I headed out there and completed Lost in the Swamp and A Stay at the Inn on heroic elite.  It was the first time I have done these quests and I found them interesting.  In between those runs, I also took Erdrique through a run of the Night Revels and Haverdashed and through a run of the Extraplanar Palace: Labor Shortage.  I called it a night after that.

Hamllin fighting the mummies in the desert.

Hamllin looking into the Night Revels.

Erdrique noticing some interesting red crystals in the cave to the yuan-ti encounter in the High Road.

Coming across a medusa in the swamp.

Erdrique exploring the Inn in the High Road.

Erdrique working in the Night Revels.

Erdrique having some fun tripping a bunch of skeletons in Haverdashed.

Erdrique moving into position to protect the kobolds in Labor Shortage.

Halloween was quite an interesting day, especially with my questing!!  I took as much opportunity as I could to do some challenge questing and Night Revels questing in between my chores and yard work.  The first thing I did was to log on with Hamllin so that he could get another shot at Haverdashed.  This time I went in on level 17 and switched weapons and had no major issues, so he got his revenge there.  After that, I logged on with Erdrique who then participated in the Night Revels as well and completed runs through Haverdashed, Kobodl’s Newest Ringleader, and Under New Ravagement.  I also had some time to complete two runs of the Extraplanar Palace: Dragon’s Hoard and a run through Dr. Rushmore’s Mansion: Picture Portals.  After the trick and treating, I logged back on Saturday night and I grouped up with Okhamel and took him through the Night Revels and through the Snitch and the Lich.  We then headed out to the Twelve to try the quest Terminal Delirium on heroic elite.  It was first look at the quests from the Heart of Madness quest series and all I can say is that it was an interesting experience.  We were in there for quite some time and when we completed it I needed to call it a night.  But I can say that we did completed it :).

Hamllin taking note of the crimson sky in the Night Revels.

Erdrique taking on the spectral dragon in the Dragon’s Hoard.

Taking on the spectral dragon once again.

Erdrique looking around the observatory of Dr. Rushmore’s Mansion in Picture Portals.

The mind flayer cooking up some zombies in Under New Ravagement.

Taking on the undead kobolds in the Newest Ringleader.

Erdrique and Okhamel dealing with the undead in the Snitch and the Lich.

Time to get our groove on in Terminal Delirium.

On Sunday, I had hoped to log in during the day like I did on Saturday but unfortunately the opportunity didn’t arise.  I did log on that night though but I had made a mistake in my calendar.  I forgot to update my calendar and had logged on with Stoorage (Level 13 Fighter) but I was supposed to play with Cannock (Level 7 Druid).  I didn’t realize this mistake until this morning when I started to think about it more.  Oh well, in either case I played Stoorage and dual boxed him with Cantlin (Level 12 Sorcerer).  I also joined up with Twotoe.  Stoorage still needed the Necro I series on elite (he hadn’t started them yet) so we ran through all five quests on elite (Tomb of the Immortal Heart, Tomb of the Sanguine Heart, Tomb of the Burning Heart, Tomb of the Crimson Heart, and The Bloody Crypt).  Even being well over level, I still wound up getting enough experience to move Stoorage and Cantlin from level 12 to 13.  Now I will just have to remember to log on with Cannock during my next scheduled run with Stoorge to get back on track.  The dilemma of having a plethora of characters :).  While running through these quests, I ran into some internet connection issues and when we were more than halfway through the Bloody Crypt my connection dropped.  It took me about another 20 minutes (if not longer) to reconnect and luckily Twotoe stayed on and waited for me.  Definitely an interesting night. 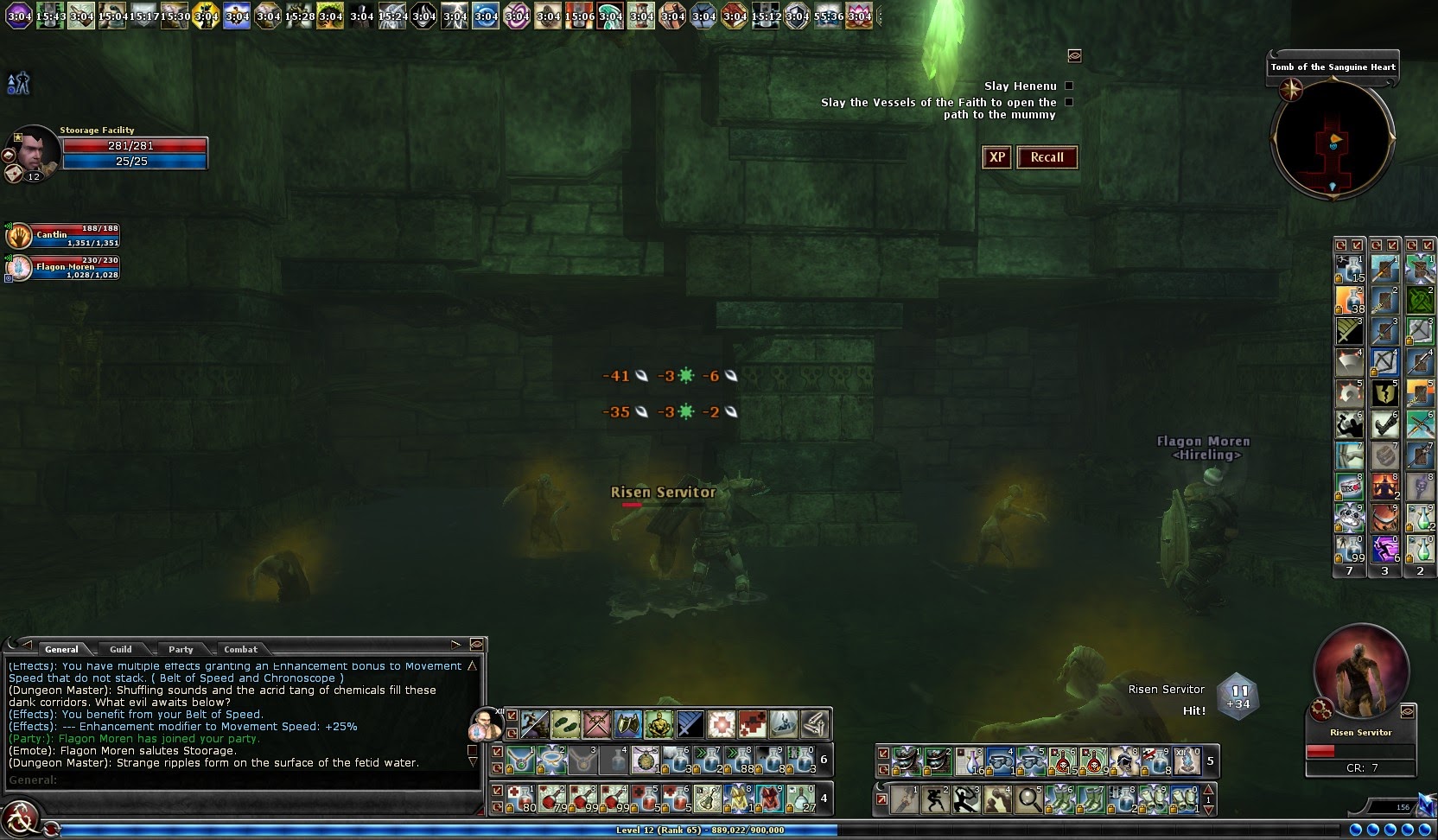 Stoorage making his way through the Tomb of the Sanguine Heart. 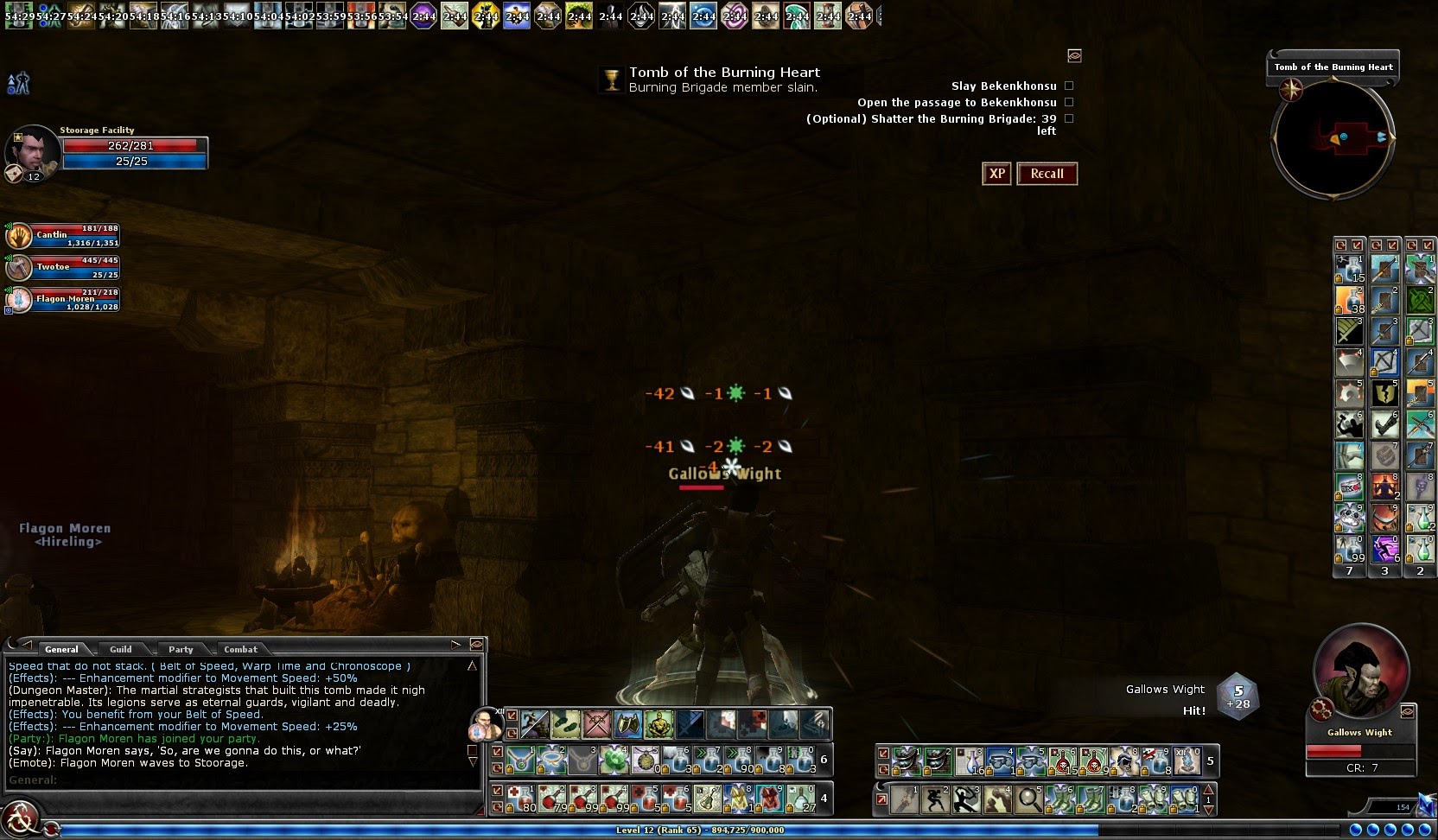 Stoorage and Twotoe making their way through Tomb of the Burning Heart. 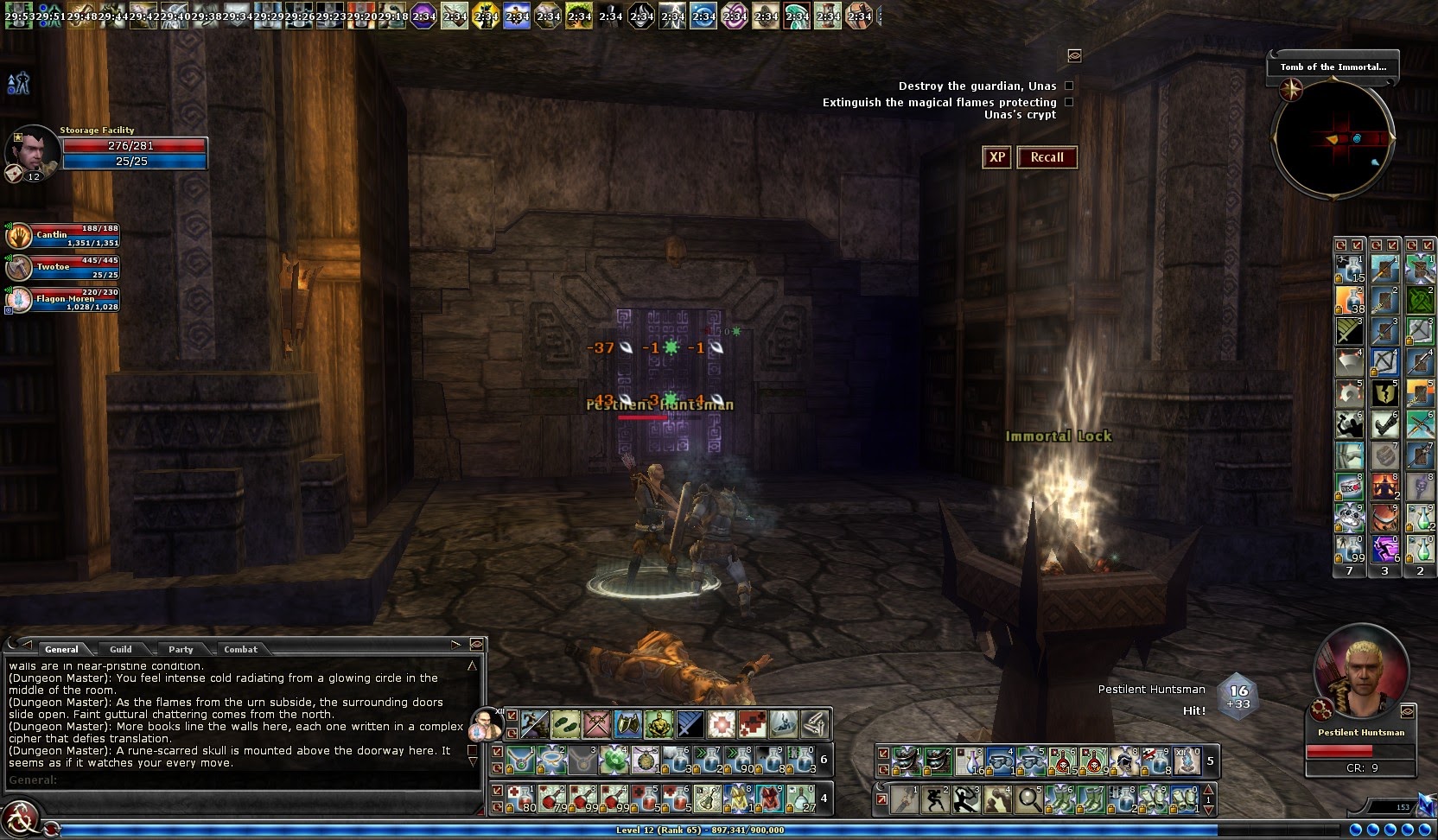 Exploring Tomb of the Immortal Heart. 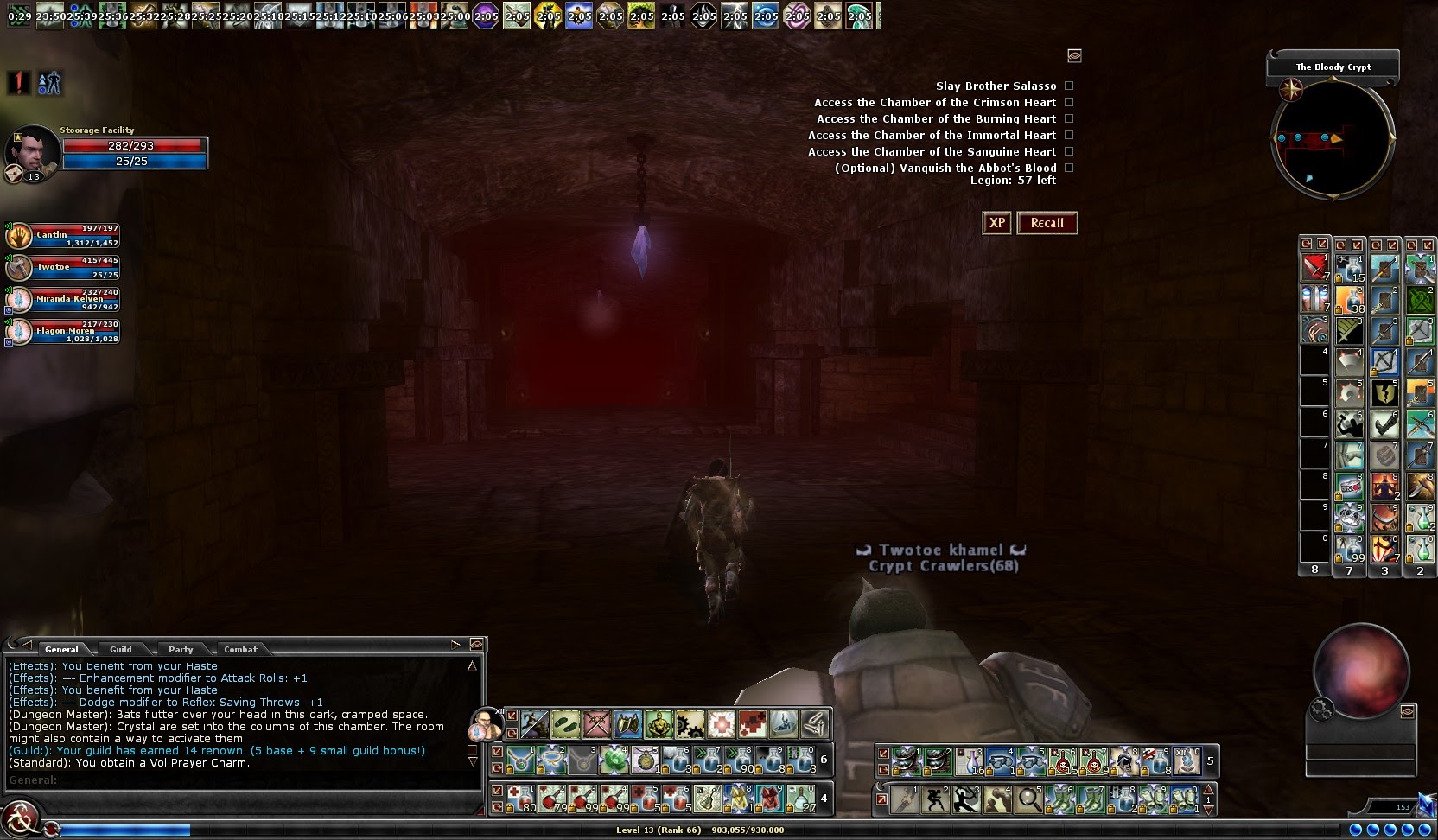 So, the weekend was quite fun.  I ran a wide variety of quests ranging from some low level slayers, to the Night Revels, to challenges, and high level heroic quests.  I hope everybody else had a fun and safe weekend as well!!  Thank you for reading and happy hunting in the Night Revels.