One of the more interesting things I have found within my questing adventures in DDO is the random encounters or discoveries of potential powerful beings without really learning anything at all about them.  This essentially forces you to create your own “lore” about these particular personas.  One of these is Saerick Vorculas.  Saerick Vorculas is the end boss in the quest, The Keeper’s Sanctuary.  When you pick up the quest for The Keeper’s Sanctuary from Archin Muriose, he doesn’t give you any indication that you might encounter such a foe, just that he is looking for these scrolls of potential knowledge, which will obviously be protected in some way. 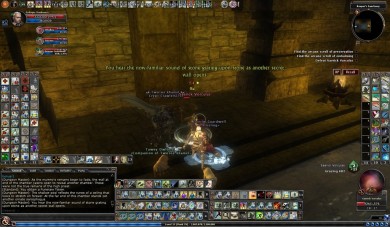 So who exactly is Saerick Vorculas?  As you make your way through the Keeper’s Sanctuary, you will discover a few interesting items that give some clues as to who this powerful enemy is.  The objective of the quest is to recover some powerful scrolls that appear to contain some powerful magics that refer to some necromancy practices.  This isn’t too surprising, since we are making our way through a sacred temple to one of the gods of the Dark Six.

This also suggests that Saerick Vorculas may have been some type of lead priest or disciple to the Keeper.  He most likely authored these scrolls: preservation, embalming, and decay.  You also may find his own personal journal only to find that you can’t open it my normal means because it is protected by some type of powerful magic.

When you finally collect these relics, you will eventually come across Saerick Vorculas, or what is left of him anyway.  You discover that Saerick is now a powerful mummy lord and a rather clever one who even attempts to distract the party by sending a “double” of himself to attack you first.  Saerick has the ability to cast a number of powerful divine spells including blade barrier and searing light,  These hints also suggest that he was once a higher level cleric/priest and that he was able to learn how to survive in the afterlife with the help of applying whatever he learned during his studies and by giving some guiding advice from the Keeper.

But when did Saerick Vorculas do these studies?  How long ago has he been in Stormreach and Delera’s Graveyard?  Why didn’t the Silver Flame not purge this powerful force when they “cleansed” the templet?  Muriose is often vague on these topics and only tells you that the zealots of the Silver Flame where interested in getting rid of the “living” monks and priests.  They had to know that followers of the Keeper most likely had some undead servants as well.  Why not clear these out?  The Keeper’s Sanctuary is littered with secret doors and passageways.  Could it be that the Silver Flame party was just so inept that they just didn’t notice these passages?  Where they somehow “blinded” from being able to discover these?

Perhaps Saerick Vorculas was just a little bored by the time we enter his Sanctuary and just wanted to have some “fun” and allowed us to find him.  In either case, he has now learned the error or his ways.  So many more questions though are left answered.  We’ll see if we come across anything else in the future that helps fill in those blanks.

Thanks for reading everybody and happy hunting in the Keeper’s Sanctuary!!